A Lesson in Patience

Patience is something you admire in the driver behind you and scorn in the one ahead.  ~Mac McCleary

You’ve heard me talk about it before, so it’s not the first and probably won’t be the last time I mention traffic. It’s a monster.  It’s a being all of its own.  I’ve tried describing the cars like marching ants, but most times they’re like the snakes on Medusa’s head.  Everybody is going in every imaginable direction, including the wrong one.  It really is a form of anarchy.

Although the horns blare, mostly as a form of warning from approaching motorcycles, people here really just go with the flow.  There isn’t road rage like you’d expect.  Tempers flare, mine included and I don’t even drive here, but drivers have learned not to take things personally and they let whatever has offended them pass.  This is a lesson I need to apply to my life.

There is never a great time to run errands here.  Pretty much every hour is rush hour.  I normally have to mentally prepare myself if I know we’ll be in the car all day.  It took us 1/2 an hour to get through 3 traffic lights on Monday.  Are you starting to understand my pain?

Today Juan and I went to try to look for a car to buy.  It’s a next to impossible feat.  Buying a used car is very expensive, almost 3 times the price of what you’d pay in Canada.  There is no rhyme or reason.  Can you imagine paying $14 000 for a 15 year old Chevy? I think not. Crazy, isn’t it? There are two main reasons for this: the price of gas is practically free (we pay about $0.26 for a tank) and there is a mafia that controls the market. People list cars, the mafia buys it, repairs it (they have their own mechanics) and then they inflate the price.  It’s frustrating as hell.

I know what you’re thinking, just go to a dealership and buy a new or used one there.  Here’s the thing: if you can find a dealership that actually has cars in it (hard to picture isn’t it, but we went by 5 or 6 today and not one had a car in it), you order a car (which takes up to a year to arrive), only to find out that what they have for you isn’t at all what you’ve ordered.  In this most common scenario you have one of two choices to make: buy the car or walk away and wait another year.  10 times out of 10, people buy a car they don’t even want.  It’s a serious problem on many, many levels.

Although it felt like it, we didn’t spend our entire day in the car.  We stopped by a fruit and veggie market to pick up some fresh herbs (which cost pennies) for tomorrow night’s pasta and then we went to a fruit stand to have some juice.  There I tried a fruit I have never heard of; it’s called nispero.  Nispero has the same skin color as a kiwi, without the fuzz.  The favor was sweet; almost like a pear and the texture was a bit grainy.  I liked it.  Juan tells me that people here make ice cream with it, now that I’d like to try. 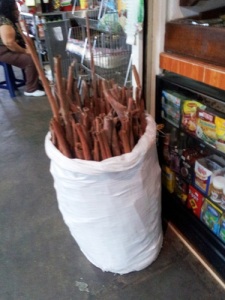 A large bag of long cinnamon sticks at the market.

I’m pretty big on giving myself rewards if I’ve had a great day (meaning my swearing wasn’t at full capacity).  Today’s reward was a plant.  We stopped by a florist and picked up the cutest little fern (not entirely sure that’s what it is) and some flowers for Juan’s mom. Plants make me happy.  Once we move to the island, our place will look like a jungle!

A small bouquet for Juan’s mom.

My other reward for being patient today?  A Campari!  Salud

An Assault on My Senses…….

A traveler without observation is a bird without wings.              ~Moslih Eddin Saadi

Flying into Venezuela is something to behold.  For some reason I forgot about its beauty.  Either that, or the last time we flew here was at night, and, therefore, we couldn’t have seen anything.  How do I describe the mountain ranges here?  Ummm, it’s like a huge green piece of paper was crumpled up into a ball and then laid flat in order to have been made into a gigantic fan.  Maybe it’s best to look at it like the folds of a long pleated skirt.  The deep green is contrasted with the blue sky and turquoise sea.  It’s breathtaking.  The closer you get to Caracas “the skirt” becomes speckled with color.  The color happens to be the barrios or slums. I had contradictory feelings when I saw that. It was beautiful and sad at the same time and then I thought of the contrasting monetary value of waterfront property.

One view of the Avila.

Like most places in North America, waterfront property is worth millions (well at least in Vancouver), and here the poorest of people live precariously on the slopes with the most spectacular view.  You will learn soon enough that Venezuela is all about contradiction.  Now it would have been nice if I had actually taken a picture of this, but I forgot to whip my phone out.  I know, how absent minded, but in my defense I had been traveling for over 24 hours and I was wiped.

Driving from the airport to Caracas was something that I prepared for.  I knew I would be confronted with a view of one of the largest barrios in Caracas.  As soon as you come out of the dark tunnel into the light all you can see are shelters constructed of tin, brick and painted in all colors imaginable. I have to be honest with you; the first time I saw this I cried.  Having lived in Canada for most of my life and having traveled around Europe and North America I was accustomed to seeing homelessness, but I had never seen poverty on such a large scale.  Again, this is contradictory because Venezuela is an oil rich country.  One has to pause for thought.  How can a country as “rich” as this have millions upon millions of people living under the lowest of poverty lines?  I digress.  Arriving on a Sunday helped ease me into Caracas.  There wasn’t “much” traffic and traffic here means absolute chaos with a noise level that is incomparable to anything in Canada.  So, all was well.  We drove through a few neighborhoods and I was impressed with how much was familiar.

This isn’t the actual barrio I was talking about. This one is on the other side of Caracas, going east.

For some reason I didn’t feel as overwhelmed as I did the first time.  I saw some obvious changes, like timers for stop lights. These things are fantastic!  They allow drivers to know how time is left on the green light and how much time they need to wait on the red light.  Now they aren’t everywhere, but they’re situated where they are most needed.  I think other major cities in the world should adopt such a system.  I think it cuts down on the stress.

The street light timers. What a perfect idea!

One thing I noticed was the quality of the streets themselves.  I think Montreal had prepared me for the worst.  Anyone who has ever driven a car or ridden a bike in Montreal will know what I’m talking about.  The infrastructure there is atrocious and is inexcusable.  This, of course, is all due to years and years of blatant corruption.  Sadly (or happily, depending on which side you look at), the infrastructure in a “developing country” is a whole lot better.  Sure there are potholes, etc, but nothing like Montreal!

The heat!  I forgot to mention how warm it has been. You would think I would have mentioned this first considering how much I complain about being cold.  I went from –30 degrees to +30 in 24 hours.  My body is adjusting well.  It likes the non-tense position that it stays in for 6 months out of the year.  My vitamin D levels have been topped up and I have some color in my face.  It’s like a rebirth!! 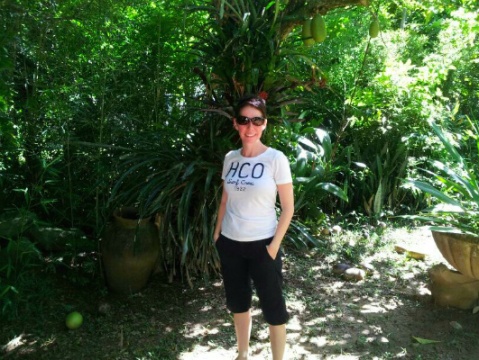 Before I go, I need to talk about food.  It always comes back to that, doesn’t it?  The freshness of food here is out of this world.  We had red snapper for our New Year’s dinner and it was so good.  I can’t emphasis this through words.  I savored every last bite.  The avocados look like they’ve been given some sort of growth hormone, but no; they just naturally grow to this size.  The plantains are as sweet as sugar and last, but not least are the passion fruit or parchitas. Not only are they super cheap, but they have to be at least 4 times the size of what we import in Canada.  I’ve been spoiled.   Juan’s mom makes the best jugo de parchita (passion fruit juice) and I’ve had a glass of it every morning!

Remind me to tell you about the beach…….

Happiness is not something ready made. It comes from your own actions. ~ Dalai Lama

I have a pretty skewed vision of “Thanksgiving”. So I thought I would by-pass all of the “nostalgia” and get to my list of happy-thankfulness.

Now in no particular order: 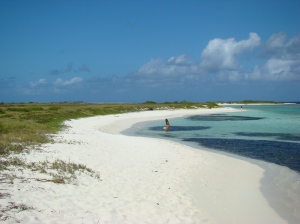 Killing two birds with one stone by having a chocolate outing with a few students! 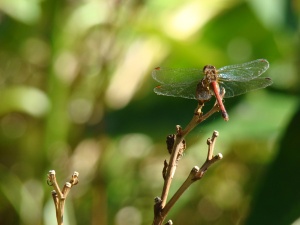 In all seriousness, I’m a very grateful person who is thankful for all that I have and for all those I get to share with.

What are you thankful for? 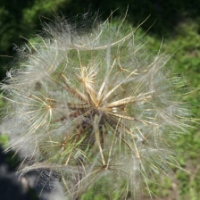 From Poutine to Arepas